Changes that have taken place over the last decade have led to very few sails destined for the top end of the market being constructed from panels, writes Katina Read. 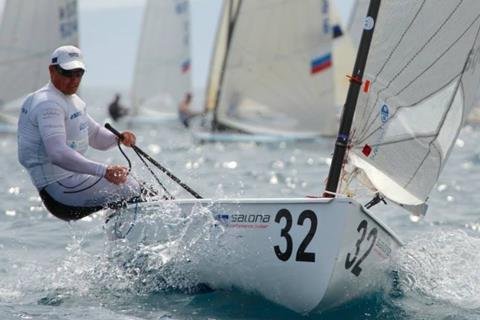 The process of making 3D sails began around 25 years’ ago in the States. Now the technology has filtered down from the top-level racers to cruisers and amateur club racers.

The process involves not only producing the sailcloth but also moulding the shape of the sail at the same time and is proving to be one of North Sails’ biggest sellers.

“It’s our newest product and the product that our customers are most interested in,” explained Mr Joëssel.

“Our technical 3Di is not just a sail cloth but a process where we build the sails and sailcloth at the same time.

“Instead of making the sailcloth and then cutting the panels, we build the sail and the fabric at the same time using a mould. We can change the shape of the mould and apply the fibres in the mould to make the sail. There are no seams.”

The process has been developed using the same technology as North’s 3DL sails that incorporated a membrane made with film and fibres.

Now, instead of films, the 3Di process uses high tech glue to hold the fibres together.

“It’s been a very interesting development. Before 2000 most sails were built with panels,” said Mr Joëssel.

“The first big breakthrough for us was with 3DL, now we’ve developed this to produce 3Di sails.”

The product is constructed from combinations of Dyneema, Carbon and Aramid depending on which class of boat and purpose the sail is intended for.

While the advances in technology in terms of sailcloth can be easily seen, what is not quite so obvious is the breakthrough in technology behind the scenes in the design process.

While sailmakers still physically get down onto the loft floor to make sails, there is a mix of old and new techniques with computer aided design and 3D modelling now the norm for high tech sails.

“A few years’ ago all the designing was carried out by hand and sail makers needed to have a sailing background,” explained Mr Joëssel. “Today most of the people we hire have to be engineers. Older designers have had to catch up on the IT side and the way they work has changed dramatically.”

In the past it was almost impossible to design sails if the boat was not built with the sail maker needing to go on board and take measurements. Now sails are ready before the boat is launched with sail designers fully integrated in the design teams.

This is especially the case with boats such as those taking part in the Vendee or Volvo races where 3D models are developed, data is entered into a computer and the sail shape and size is integrated into the boat build.

“With boats such as a Vendee Globe boat, we know details such as the righting moment of the boat and are able to simulate everything and know when the loading point before the boat is launched,” said Mr Joëssel.

“While we can’t do it for every project and – especially for cruising boats – still have to go onto the boat and take measurements, design work is very different from what it used to be.”

The advances in the sail making process and boat design combined, and particularly the development of foiling, have led to vast improvements in terms of round the world records – the first crewed non-stop multihull record was in 1993 in a time of 79 days; in 2012, this came down to 45 days.

“There are not that many sports where you can improve things so much as in offshore sailing,” explained Mr Joëssel.

“Foiling is changing everything in terms of sail shapes and sail design. This also applies to windsurfing and kitesurfing. Everyone wants to go foiling.”

As Mr Joëssel points out: “We are still discovering what will happen next.”